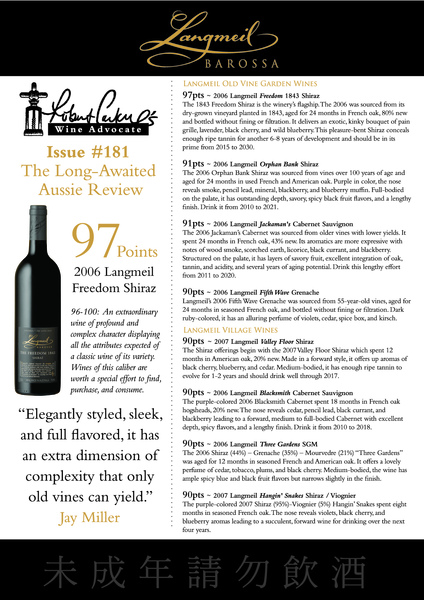 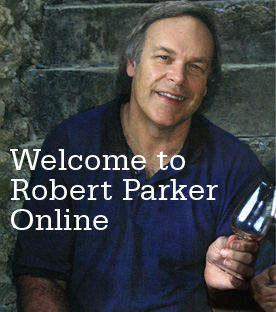 The 1843 Freedom Shiraz is the winery’s flagship. The 2006 was sourced from its dry-grown vineyard planted in 1843, aged for 24 months in French oak, 70% new and bottled without fining or filtration. It delivers and exotic, kinky bouquet of pain grille, lavender, black cherry, and wild blueberry. This pleasure-bent Shiraz conceals enough ripe tannin for another 6-8 years of development and should be in its prime from 2015 to 2030.

The 2006 Orphan Bank Shiraz was sourced from vines over 100 years of age and aged for 24 months in used French and American oak. Purple in color, the nose reveals smoke, pencil lead, mineral, blackberry, and blueberry muffin. Full-bodied on the palate, it has outstanding depth, savory, spicy black fruit flavors, and a lengthy finish. Drink it from 2010 to 2021.

The 2006 Jackaman’s Cabernet was sourced from older vines with lower yields. It spent 24 months in French oak, 43% new. Its aromatics are more expressive with notes of wood smoke, scorched earth, licorice, black currant, and blackberry. Structured on the palate, it has layers of savory fruit, excellent integration of oak, tannin, and acidity, and several years of aging potential. Drink this lengthy effort from 2011 to 2020.

Langmeil’s 2006 Fifth Wave Grenache was sourced from 55-year-old vines, aged for 25 months in seasoned French oak, and bottled without fining and filtration. Dark ruby-colored, it has an alluring perfume of violets, cedar, spice box, and kirsch.

The Shiraz offerings begin with the 2007 Valley Floor Shiraz which spent 12 months in American oak, 20% new. Made in a forward style, it offers up aromas of black cherry, blueberry, and cedar. Medium-bodied, it has enough ripe tannin to evolve for 1-2 years and should drink well through 2017.

The purple-colored 2006 Blacksmith Cabernet spent 18 months in French oak hogsheads, 20% new. The nose reveals cedar, pencil lead, black currant, and blackberry leading to a forward, medium to full-bodied Cabernet with excellent depth, spicy flavors, and a lengthy finish. Drink it from 2010 to 2018.

The 2006 Shiraz(44%)-Grenache(35%)-Mourvedre(21%)”Three Gardens” was aged for 12 months in seasoned French and American oak. It offers a lovely perfume of cedar, tobacco, plums, and black cherry. Medium-bodied, the wine has ample spicy blue and black fruit flavors but narrows slightly in the finish.

The purple-colored 2007 Shiraz(95%)-Viognier(5%)Hangin’Snakes spent eight months in seasoned French oak. The nose reveals violets, black cherry, and blueberry aromas leading to a succulent, forward wine for drinking over the next four years. 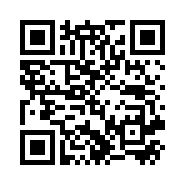